Biggar held their last meeting of the season on Sunday 8th April. Guests for the evening were local accordion and keyboard teacher Keith Dickson’s two accordion groups Kodetta and KODA.

But firstly we had a wealth of local talent to entertain us with accordionists Charlie Todd, Andrew Gibb, Allan Ferguson, Elisabeth Morrison, Bob Berry, Ronnie Johnston (Musselburgh), mother and daughter Fiona and Shona Sinclair (Eddleston), Davy Millar, Janet Graham, Margaret Ferguson and Tom Cruickshanks (Inverness). On fiddle was Tom Gold and on tin whistle Willie Little (Dumfries). On keyboard we had Alan Gardiner, Jim and Scott Nichol and Dorothy Lawson and on drums Geordie Shiels, Tom Hope and Andrew Barrie. Thanks to them all for their musical contributions.

Keith’s younger group, Kodetta, consisting of Ellie Borthwick, Kyle and Alan Rowan, India and Kyra Smith, Nuala Turnbull, Andrew and Samantha Erskine, Fraser Hewitt and Fiona Shearer did the first guest spot with an immaculately worked out programme of soloists, duets and trios (all backed by Keith on keyboard) leading up to four numbers from the full group with accordionists, keyboards, drums and a piper.

The senior group KODA, ranging in age from 14 to18 and consisting of Steven Todd, Adam Gibb, Hannah, Emma and James Dickson, Claire Black, Megan Bell, Erin McGinley, Robbie Paterson, Duncan Muir and Amie Kirkpatrick followed a similar pattern for the guest spot at the end of the second half.

Both programmes were well rehearsed and well presented with Keith himself doing the links to an audience supplemented by parents and followers of the groups. A big thank you to all the youngsters and to Keith for putting it all together.

A special mention this month for new parents Jim Gold and Hannah Jamieson who brought along 2 week old baby Emily. Congratulations to them both.

And finally thanks to our Chairman Alan Gardiner and his Committee for all their hard work during the year, the B.B.C. (Biggar Bowling Club) for all their assistance and the KODA mums for a magnificent spread of sandwiches and Easter cakes for our final night. 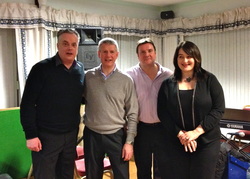 For our March meeting at Biggar on Sunday 11th we had the Neil MacEachern SDB as guests. With Neil leading on accordion, wife Angie on fiddle, Tom Murray on keyboard and Stevie Beattie on drums, it was a welcome return of some faces we haven't seen for quite some time. They played a very entertaining selection of Scottish music ranging from fine pipe marches to lovely old Scottish waltzes and Bobby MacLeod’s Kererra Polka. This band definitely has all the ‘swing’ and ‘lift’ you look for in the way they deliver the music. Four lovely fiddle solos from Angie reminded us why she was a champion on that instrument a few years ago and she’s lost none of her touch.

Thank to Ovens the Butchers from Biggar High Street for sponsoring the sausage rolls and to the KODA mums for the cakes. 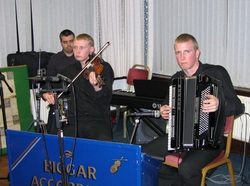 Our February meeting saw popular local artistes, the Jim Gold Trio, appearing as guests at the club but first we were treated to a great display of young (and not so young) talent. On accordions we had Alan Gardiner, Janet Graham, Charlie Todd, Davy Millar (from Newbigging near Carnwath) making his debut at 71, Fraser Hewitt, Alan and Kyle Rowan, dad Brian and daughter India Smith, Ellie Borthwick, Kyra Smith, Elizabeth and Frank Morrison, Claire Black, Emma Dickson, Andrew and Adam Gibb, David Kennedy, Allan Smith, Blair Gardiner and Steven Todd. On fiddles were Gilbert Logan and Hannah Dickson and on keyboard Alan Gardiner, Keith and Emma Dickson and Steven Todd. On drums were Charlie Todd, Geordie Shiels, Tom Hope, Andrew Gibb and James Dickson. David Corner was our concertina player for the evening.

There was a lot of excellent playing with some lovely Continental numbers to the fore. Claire Black’s Tic Tac Polka, India Smith’s Petit Overture and Emma Dickson’s Brise Napolitaine were all superb as was an arrangement of ‘Alpine Meadow’ played by the three accordions of India Smith, Ellie Borthwick and Kyra Smith.

The Jim Gold Trio consisting of Jim on lead accordion, brother Tom on fiddle and Ross Anderson on drums are regulars at the club and it’s nice to see them along as guests every once in a while. They gave us an interesting and varied programme, with a couple of fiddle solos for which Jim transferred onto keyboard. They worked their way through the various tempos and played an enjoyable mixture of old and new tunes which were well received by the assembled listeners and players. The boys support us every month and it’s good to see them being well supported in return.

Thanks to the ‘Apple Pie’ bakery in Biggar for sponsoring this months pies and sausage rolls, much appreciated, and to the KODA mums for the lovely home baking. 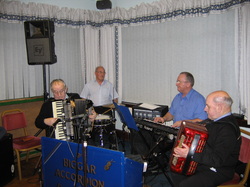 The new year started at Biggar Bowling Club with what could be called the ‘Old Comrades’ band – from Drymen we had Dochie McCallum and Friends. With Dochie leading on Shand Morino, Rikki Franci on second box, Neil McMillan on keyboard and Gus Millar on drums we were treated to an evening of good old fashioned dance music. Our unassuming bandleader gave us a good selection of tempos and threw in a couple of well received jokes. It’s great to hear the Shand Morino again, since it’s becoming a bit of a rarity these days.


We had a good turnout of local talent in the shape of accordionists Frank and Elizabeth Morrison, Jim Gold, Charlie Todd, Fraser Hewitt, Emma Dickson, Andrew and Adam Gibb, Samantha and Andrew Erskine, Claire Black and Allan Smith. On fiddles were Tom Gold and Hannah Dickson. On keyboard Jim Gold, Dorothy Lawson, Alan Gardiner, Emma Dickson and Adam Gibb and on drums Geordie Shiels, Tom Hope, Andrew Barrie, James Dickson and Andrew Gibb. David Corner gave us a couple of selections on concertina and Ian Murray, mandolin, kindly stood down as we were short of time.

Thanks to the KODA mums for the excellent catering at half time, to Brownlie’s of Biggar High Street for sponsoring the sausage rolls and to Joan Gold for all her hard work in the kitchen and at the door. 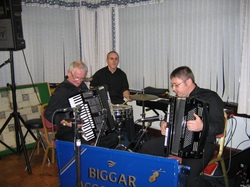 Our guests were the Robin Hamilton Trio, with Robin from West Barnes leading on Morino V, Alistair Laing from Dunbar on second box and drummer Davy Scott, also now Dunbar but better known as ex Dundee and the Craigowl Band. Robin and the boys gave us an excellent selection of music, including a lovely waltz by Robert Black entitled ‘Angus Howie of Millhouse’, an old Continental waltz favourite ‘Corinne’ and a great arrangement of the ballroom classic ‘Moon River’.

Robin and the boys gave us a wide variety of well played music that kept the listeners well and truly entertained.

Thanks to the KODA mums who provided the sandwiches and to the Biggar Co-op who sponsored the Christmas pies and shortbread.

Sunday January 8th 2012 sees us at the Biggar Bowling Club at 7pm to hear that old favourite, Dochie McCallum and his band. We hope to see you there. In the meantime compliments of the Festive Season to all. 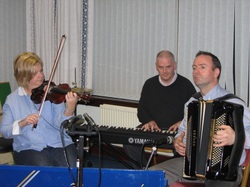 As always all of Keith’s pupils gave an excellent account of themselves having been tutored not just in the technicalities of playing but also on the importance of being able to entertain listeners.

Our guests were the extremely competent trio who call themselves Tribute, namely Marie Fielding on fiddle, Duncan Black on accordion and Owen Fielding on keyboard. With a minimum of dots in front of them they gave us many inspiring sets in all tempos, played with the confidence granted only to those who are experts on their chosen instruments. There’s no doubt, as the late Jim Johnstone used to say, that looking as though you’re enjoying playing, and not being glued to the music throughout, does enhance the performance.

Well done to the three of them.

Thanks also to the parents of the KODA band for providing the sandwiches and cakes. 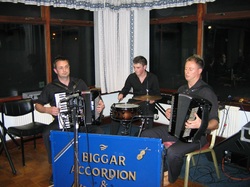 A rather wet and windy evening did nothing to dampen spirits at Biggar for our first meeting of the new season in September. We had an excellent turn-out of local artistes to support us with accordionists Janet Graham, Charlie Todd, Jim Gold, Kyle and Alan Rowan (all the way from Edinburgh), Claire Black, Andrew Gibb, Robbie Paterson, Adam Gibb, Samantha and Andrew Erskine, Emma Dickson and David Kennedy. On fiddle were Tom Gold and Hannah Dickson and on keyboard Jim Gold, Alan Gardiner and Keith Dickson. Drummers for the evening were Geordie Shiels, Tom Hope and Andrew Gibb.

Our guests were the Pentlands Ceilidh band consisting of accordionists Colin Brown and Derek Rae and drummer Gary Kellow. It was a case of third time lucky in the sense that we had booked the band in each of the previous two seasons but had to call-off because of bad weather. Thankfully this time all was well and the trio gave us an excellent evening of well played, well arranged dance music. Chairman Alan Gardiner recalled competing against Colin some years ago. As ever the two accordionists repeatedly swapped lead during the evening and young Gary blended in well to the mix. Thanks to the lads for making the trip to entertain us.

We have no meeting in October.