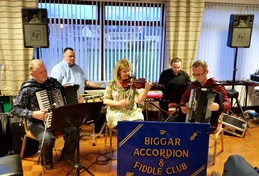 
﻿Biggar closed the season in style on Sunday, 12th April with Stuart Cameron and his SDB at the Biggar Bowling Club. Stuart on lead accordion, was accompanied by Marie Fielding on fiddle, John Burns on second accordion, Craig Paton on keyboard and Finlay Robertson on drums. This splendid 5 piece with a modern slant to their arrangements and a definite liking for West Coast pipe music gave us two captivatin﻿g spots which held the audience’s attention.

But before that we were entertained by the usual wealth of local talent. On accordions we had seven year old Fin Hope (proudly brandishing The Jim Johnstone Trophy from the Newtongrange Competitions), Charlie Todd, Davie Millar, Emma Dickson, Kyle Rowan, John Weaks, David Kennedy, Fiona Paul, Jim Gold and Adam Gibb plus Keith Dickson with the Scots Music

Three-year-old Emily Gold enchanted us all once again with a song, accompanied of course by dad Jim, and young Molly Tolson gave us an a faultless recitation of a humorous poem she had written herself.

Half time was accompanied by the usual selection of home-baking from the KODA mums and Alex and Nettie, who open up and man the bar every evening on behalf of the Bowling Club, were presented with flowers and chocs in appreciation of their efforts.

Thanks to the Biggar Bowling Club and to our chairman Alan Gardiner for successfully steering us through another season. We resume on Sunday, 13th September with the David Kennedy SDB.


﻿﻿﻿﻿Sunday, 8th M﻿arch at the Biggar Bowling Club saw a full house to hear the Neil Hardie SDB. Neil was ably supported by sister Caroline on fiddle, Brian Forrest on second accordion, Andrew Morton on drums and Jim Nic﻿ol on ke﻿yboard. As always a great choice of dance tunes, well played with bags of ‘oomph’, nice tempos and a lovely fiddle solo from Caroline. Scottish ﻿dance music as it should be.
﻿﻿

﻿Being the day after the Inshyra Festival Competitions the youngsters were less numerous but we still had plenty of local talent to entertain us. But firstly congratulations to Emma Dickson who refilled the display cabinet at home with ‘Firsts’ in the Senior M,S&R, the Open Musette Solo and the Open Classical Solo, a 2nd in the Open Trad Accordion Solo and a 3rd in the Own Composition (with her jig ‘Tom Hope of Nisbet’). Well done Emma.﻿

Our sole fiddler was Tom Gold and David Corner played the concertina.

Thanks once again to Sheena Dickson and the KODA mums for the half-time buffet. 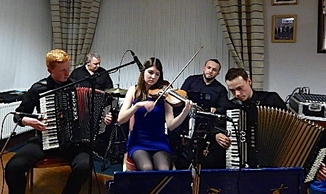 
S﻿unday, 8th February, a mild evening even if there was still  snow lying around Biggar as we all ﻿met at the Bowling Club for another evening of traditional entertainment. Each year we try to have one of Keith Dickson’s senior pupils as guest and this year it was the turn of 18-year-old Adin Graham from Windygates in Fife.

Adin was accompanied on stage by Hannah Dickson (fiddle), Adam Gibb (second accordion), Craig Paton (keyboard) and Gordon Smith (drums), hence a blend of youth and experience (Gordon being the sole representative of the latter). In an excellent programme they played with plenty of ‘welly’ and Hannah gave us two fine fiddle solos. All-in-all a first class performance from this young band. I’m sure we’ll be hearing a lot more of them in the future. 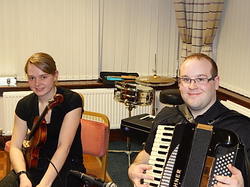 Biggar A&F Club held their first meeting of the new year in Biggar Bowling Club on Sunday, 11th January. The weath﻿er was r﻿ather ‘dreich’ which kept some potential listeners and players away but those who came enjoyed a splendid evening of music.

Local players who entertained were accordionists Charlie Todd, Fraser Hewitt, Andrew Erskine, Ronnie Johnstone, Rose Cursiter, Jim Gold, Emma Dickson, Newby Park and Janet Graham. On fiddle we had Gilbert Logan and Hannah Dickson. Keyboard was in the capable hands of Alan Gardiner, Fiona Shearer and Keith Dickson and drummers were Tom Hope, James Dickson and Geordie Shiels. David Corner played his concertina and 2½ year old Emily Gold stole the show again with a song. 3 year old Calum Gardiner may not be on stage yet but he can clap in time with the best of them.

For our guests it wasn’t so much a case of ‘East meets West’ as ‘South Shields meets the Shetland Islands’ in the shape of Leonard Brown and Maggie Adamson. A stunning duet which captivated us with a varied programme beautifully executed. We would have expected nothing less from this talented pair and Leonard’s links and jokes were the icing on the cake. Maggie’s very moving rendition of Willie Hunter’s classic ‘Leaving Lerwick Harbour’ and Leonard’s tribute to Dermot O’Brien were two highlights in a first class programme. Without a doubt these two come ’highly recommended’ to any Club.

Thanks to Alan Gardiner as MC, to Sheena Dickson and the KODA mums for the marvellous half-time buffet and to the B.B.C. for hosting us. 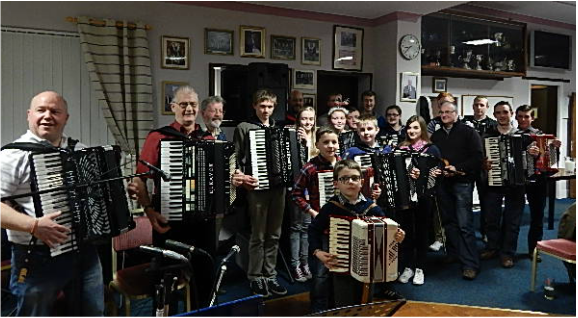 
﻿The﻿ club met for their final meeting of 2014 on Sunday, 14th December in the usual venue, Biggar Bowling Club. For a change we had no guest artiste instead giving local players centre stage but quality was guaranteed when these are mostly Keith Dickson’s pupils. Pupils past and present who entertained on accordion were Fraser Hewitt, Kyle Rowan, Fin Hope, Brian Smith, Andrew Wight, Katie Todd, Duncan Hutchison, Andrew Erskine, India Smith, Roy Anderson, Jim Gold, Adam Gibb and Emma Dickson. ‘Old hands’ also present were Allan Smith, Charlie Todd, Newby Park and David Corner who played a 2 row melodeon for the first time at the Club.

On fiddle we had Tom Gold, David Corner and Gilbert Logan and on mandolin we had a welcome visit from Ian Murray. Keyboard players were Alan Gardiner, Fiona Shearer, Alan Rowan, Jim Gold, Adam Gibb and Keith Dickson and drumming was in the hands of Tom Hope, James Dickson and Ross Anderson.

Thanks to the KODA mums for the half-time buffet and to Peter Rae our resident photographer. 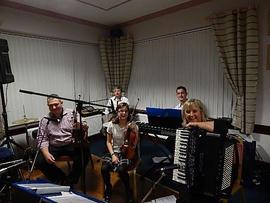 In introducing our guest artistes Chairman, Alan Gardiner, paid tribute to Alex and Evelyn MacArthur and John and Joy Anderson who between them ran the Club from 1974 until the present Committee took over. Our guest, Jennifer Cruickshank’s, musical career really started under Alex guiding hand hence it was appropriate that it was Jennifer (accordion), husband Brian (fiddle), son Callum (keyboard), daughter Iona (fiddle) and close family friend Duncan Christie (drums) who were with us on our 40th to entertain, particularly since Alex and John always encouraged the youngsters at the Club. They treated us to two excellent sessions of music and banter.

At half time a magnificent cake, made by club regular Hannah Jamieson, was cut by Fiona Lawson from Newbigging, Alex and Evelyn’s daughter, and thereafter everyone enjoyed the usual excellent spread provided by the KODA mums and took the opportunity to look at a selection of Peter Rae’s old photographs put together by Keith and Sheena Dickson.

Thanks to everyone who worked hard to make the night a great success.

Our guest band featured Andrew on lead, Jamie Young on second accordion, Tom Gold on fiddle, Jim Gold on keyboard and Gordon Smith on drums. Although Andrew is a regular attender at the Club amazingly it’s seven years since his last guest spot with us. The time has been well spent though and with his first BBC Radio Scotland broadcast under his belt he demonstrated a maturity beyond his years and treated us to many excellent selections in a variety of tempos. Listening to this band was a delight, dancing to it would have been even better.

Thanks again to the lads for their excellent music and to the KODA mums for their half-time buffet. The Club skip October because of the Shetland Festival and next meet on Sunday 9th November when we celebrate our 40th Anniversary with Jennifer Cruickshank and Family.