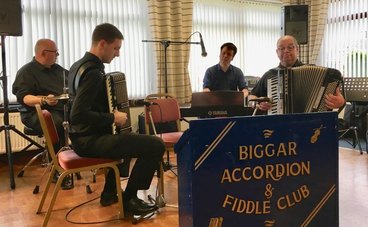 Guest artists for the afternoon were The Hector MacFadyen Scottish Dance Band all the way from Oban comprising Hector on lead accordion, Craig MacFadyen on second accordion, Matthew Maclennan on keyboard and Kevin McGlynn on drums.  The audience were treated to some great entertainment and thoroughly enjoyed both the music and the bands’ camaraderie. 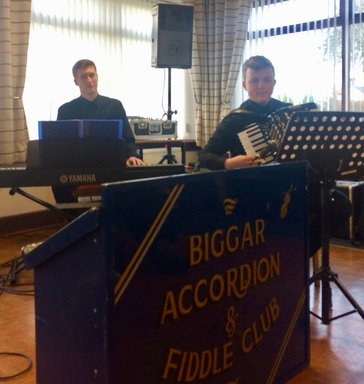 
It was the turn of two very talented youngsters, Kyle and Alan Rowan, to entertain us as guests at our March meeting on Sunday, 12th at Biggar Bowling Club. But first we had a wealth of local talent in the form of accordionists Rose Cursiter, Sheena Dickson, Alan Gardiner, Alec Graham, Jim Gold, Fin Hope, Jake Johnstone (with sister Jenna on guitar), Davy Millar, Newby Park, Fiona Paul, Anna Scott, Allan Smith, India Smith, Charlie Todd, Harry Tolson, Ann Wall, John Weaks, and visiting us all the way from Leeds Aileen Buchanan. On fiddle were Tom Gold and Gilbert Logan. Pianists were Keith Dickson, Alan Gardiner, Jim Gold, Fiona Paul, Stevie Todd and Molly Tolson and on drums were Ross Anderson, Tom Hope and Charlie Todd. We were delighted to welcome John Caskie from Locharbriggs who entertained us with a couple of songs and Molly Tolson also treated us to some Burns poetry.

Our two young guests Kyle (15) and Alan (16) on accordion and piano are from Edinburgh and both pupils of Keith Dickson. Fresh from winning 9 trophies at the recent NAAFC Festival, Kyle ably demonstrated his prowess on the box, while brother Alan provided sympathetic accompaniment on the piano. Like his Dad, (PM Gordon Rowan) Kyle also plays the pipes, and although he didn’t perform any of this programme on bagpipes it probably helps to explain the total absence of sheet music on stage. Kyle even attempted to introduce his Gaelic waltzes in their original titles – well done. The boys played an excellent variety of music, including an interesting Finnish number called ‘Liikkuu’ and a fine rendition of Henry Mancini’s classic ‘Moon River’ - worthy guests for any Club.

Our thanks, as always, to the Biggar Bowling Club, the KODA mums for the excellent half-time buffet and Alan Gardiner and Joan Gold for running things so smoothly.
​
Our last meeting of the season is on Sunday, 9th April when the Hector MacFadyen SDB from Oban make the journey down to entertain us. We look forward to seeing you.
​
​ 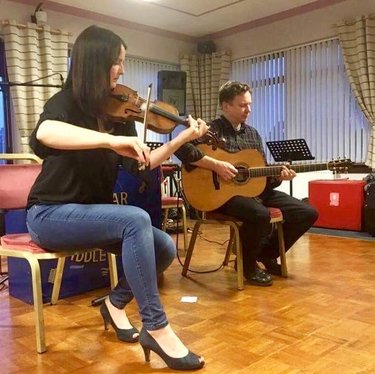 The Club met on Sunday, 12th February, a rather chilly afternoon, to be entertained by the usual mixture of local and ‘professional’ talent. Player numbers were down since it was ‘mid-term’ holiday for the schools and many of our regular youngsters’ parents had taken the chance to get away for a short break. But that still left us with a more than adequate attendance.

On accordions we had Angus Lyon, John Weaks, Neil McMillan, Rose Cursiter, Allan Smith, Emma Dickson, Davie Millar, Sheena Dickson, Ronnie Easton, Alan Gardiner and Charlie Todd. Unsurprisingly we had a better-than-usual turnout of fiddlers with June Meikle, Tom Gold, Hannah Dickson, Finlay Close and a first-time club attender, but very proficient player, June Nelson from Edinburgh. On keyboard were Stevie Todd, Keith Dickson, Neil McMillan and Emma Dickson and on drums Tom Hope, Andrew Barrie and Charlie Todd. Willie Little, from Dumfries, gave us a couple of selections on the tin whistle.
​
Our guests for the afternoon were fiddler Jenna Reid and accompanying guitarist Kevin MacKenzie. Jenna, a well-known member of Blazin’ Fiddles, gave us two excellent sessions which showed her absolute mastery of the instrument, enhanced by her explanations of the tunes and the composers. Guitar backing is new to us, but Kevin provided a sympathetic and pleasing accompaniment throughout. Jenna explained at the start that this was her first appearance at an Accordion and Fiddle Club since her days as a learner in her native Shetland. We certainly hope it won’t be her last.

Thanks to the Biggar Bowling Club, the KODA mums for the excellent buffet and to Alan Gardiner and Joan Gold (Wallace and Gromit) for running the afternoon so smoothly.
​ 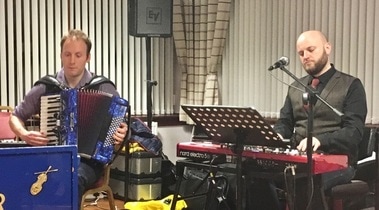 Our only fiddler was Tom Gold and on piano were Keith Dickson, Alan Gardiner, Fiona Paul, Alan Rowan and Stevie Todd. Drummers were Ross Anderson, Andrew Gibb, Tom Hope and Charlie Todd. Shelley Clark sang us a couple of songs and four-year-old Emily Gold told us a wee story.

Our guests for the afternoon were John Somerville (accordion) and Hamish Napier (piano). John, originally from Abriachan on the north shore of Loch Ness, and Hamish, originally from Speyside, entertained our attentive audience with a wide variety of tunes played in a contemporary folk music style, including several of their own compositions - later kindly donating copies of the sheet music to the local musicians! The duo clearly explained the background to the tunes and Hamish provided even more variety by singing a couple of traditional songs and playing the strathspey “The Sweetness of Mary" on wooden flute.

Thanks again to the Biggar Bowling Club for hosting us, the KODA mums for the excellent half-time buffet and to Alan Gardiner and Joan Gold for making the whole afternoon run like a well-oiled machine.
​
​ 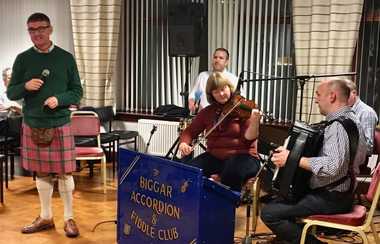 Biggar Club rounded off the year at its December meeting with a ‘Club Afternoon’ highlighting the local players but with a little bit of ‘professional’ input. Supporting players turned out in force to make it an afternoon to remember. On accordions we had Fin and Jamie Hope, Davy Millar, Ian Ramsay, Ann  Wall, Andrew Gibb, Harry Tolson, Aimee-Mae Smith (her first accordion club performance) and grandfather   John Gray, Jim Gold, India Smith, Charlie Todd, Ian Graham, Alan Gardiner, Rose Cursiter, Sheena   Dickson and Fiona Paul. On fiddle were Gilbert Logan, Emma Gardiner, Tom Gold and young Finlay Close from Pettinain who was making his debut at the club. On keyboard Alan Gardiner, Keith Dickson, Molly Tolson, Evie Glen, Rosie Bowman Jim Gold and Fiona Paul. Drums were in the capable hands of Andrew Barrie, Tom and Fin Hope and Ian Graham. Willie Little played the penny whistle and Shelley Clark sang us a couple of lively modern Christmas songs. We enjoyed a great diversity of entertainment including a Scots Christmas poem from Molly Tolson, a piano duet (Beauty and the Beast) from Evie Glen and Rosie Bowman, and an all-too-rare fiddle solo from Emma Gardiner proving what an excellent fiddler she is.

Our guest this month was well-known Dumfries-shire singer, raconteur, Burns enthusiast, Scottish Country Dance teacher and general all-rounder William Williamson. Several of the Club’s ‘auld hauns’ (Alan, Keith, Charlie and Andrew Barrie) have known William for many years so it was a case of reliving the days when traditional Scottish entertainment was a bit more widespread than it is these days. William, backed by Alan, Keith and Andrew, gave a good account of himself and kept the audience well entertained with a variety old Scottish Song favourites as well as a well danced Highland Fling as his finale. Thanks to William and wife Linda for making the journey up from Amisfield.
​
Thanks also to the Biggar Bowling Club, Sheena Dickson and the KODA mums for an excellent tea at half time and Alan Gardiner and Joan Gold for steering us successfully through another afternoon.
​ 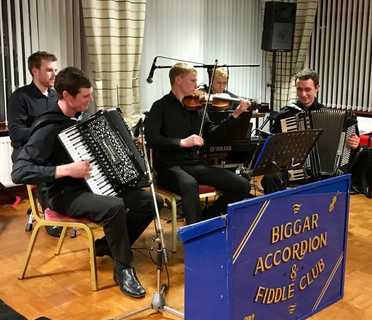 Accompanying Duncan Hutchison as guests were Jamie Young (second accordion), Tom Gold (fiddle), Jim Gold (keyboard) and Andrew Gibb (drums). These local lads provided a well rehearsed, nicely balanced programme of Scottish Dance music which suited the audience to a T.  Tom Gold’s fiddle solo,  “The Beaumont Rag” , made a nice contrast and was well received.
​
Thanks to the Biggar Bowling Club for hosting us, the KODA mums for the excellent buffet at half time and all the supporting players and audience for making it an excellent afternoon.