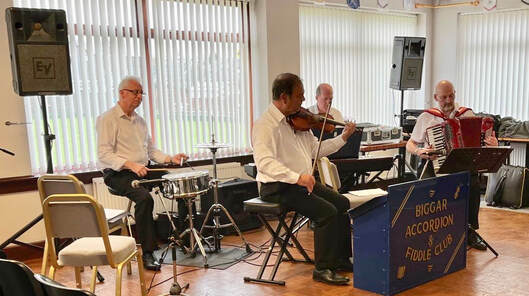 
Biggar's shortened season drew to a close on Sunday, 10th April with local accordionist Allan Smith & Friends as guests. But first were entertained by local accordionists Charlie Todd, Gus Lowrie (Selkirk), Newby Park, Jim and Emily Gold, Alan Gardiner, Fin Hope and Davie Millar from Forth. On fiddle were Tom Gold and Emma Gardiner and on tin whistle Willie Little from Dumfries. Keyboard players were Jim Gold and Alan Gardiner and on drums were Tom Hope and Ross Anderson.

Allan Smith was accompanied by Roddy Matthews on fiddle, Keith Dickson on keyboard and Ian Graham on drums. The boys played an excellent programme which was well received by an appreciative audience. Included in the programme were quite a few of Allan's own compositions from his recently released book including a lovely, but tricky, Continental waltz entitled 'Waltz for Carol Ralton'. For his fiddle solo Roddy gave us a fine rendition of his own composition 'Leaving Lordenshaw'.

All-in-all and excellent afternoon, at the end of which our Chairman, Alan Gardiner, thanked Biggar Bowling Cluband in particular Alex and Nettie Maxwell for hosting us and said that he hoped to see everyone back in November for the start of our 49th season
​ 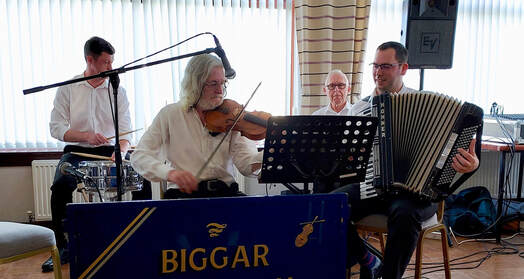 
Biggar held its March meeting on Sunday 13th at Biggar Bowling Club with a very last minute change of guest artiste due to Covid. Unusually local players were very short on the ground with Alan and Calum Gardiner, Marshall Harkness and Charlie Todd on accordions, Shona McLeod on fiddle and Tom Hope on drums. Bill Ewan from the guest band stepped in on keyboard.


As guests we were delighted to welcome the Ewan Galloway SDB, with Ewan on lead accordion, Andrew Knight on fiddle, Bill Ewan on keyboard and newcomer Ross Angus on drums. As always the band gave us two entertaining and lively spots which included some well played modern numbers. Ewan was very active over Lockdown with a range of on-line entertainment, including RadioGH and The Stagger Inn which have continued since with a large on-line following.

​Biggar Club restarted its season on Sunday, 13th February with a great turnout of supporters to hear our local guest artiste. But before that we had the usual array of local (and not so local) talent. On accordions were Newby Park (Carlisle), Marshall Harkness (on moothie this time), Fiona Paul, John Stuart (Ellon), Allan Smith, John Elliot,  Sheena Dickson, Charlie Todd and young Emily Gold – who always steals the show. Our only fiddler was Shona McLeod from Strathaven, a fine young player and on vocals was Shelley Gold. Keyboard players were Fiona Paul, Aileen Jamieson (Ellon) and Keith Dickson and drummers were Tom & Fin Hope and Andrew Gibb.

Our guest artiste for the afternoon was 14-year-old Fin Hope’s Scottish Dance Band from nearby Broughton in Peeblesshire. For this, the band’s debut appearance, Fin didn’t have to look far for his band members and he had Tom Gold on fiddle, Adam Gibb on second box, Andrew Gibb on drums and Jim Gold on keyboard. For such a young player appearing as a bandleader for the first time Fin did an excellent job ably supported by the boys, who all being regulars anyway, helped out during the course of the afternoon in various roles by backing the local players.
Fin played a couple of tributes to the Club’s late founder, Alex MacArthur, namely Old Comrades and The Highland Wedding and his programme included a sizzling Continental polka entitled A Fond La Caisse. The band’s tempos were rock solid, swingy and Fin’s introduction of his band members was hilarious. A young man with a very bright future ahead of him. 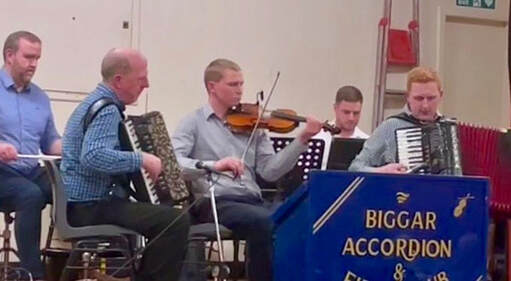 Our meeting on Sunday, 12th December was held under a slight shadow as Covid numbers increased and our numbers correspondingly decreased. However, it was a very pleasant afternoon of traditional music initially in the hands of our local musicians.
On accordions we had Marshall Harkness, Charlie Todd. Fin Hope, Duncan Hutchison, Sheena Dickson and a first timer at Biggar, Scott Wilson from Blyth Bridge. On fiddle were Tom Gold and another first timer Shona McLeod from Strathaven. On keyboard were Stevie Todd and Keith Dickson and on drums Tom Hope, Charlie Todd, Andrew Barrie and Fin Hope.


Our guests were the Adam Gibb Band from nearby Toftcombs, with Adam on lead accordion, Tom Gold on fiddle, Stevie Todd on keyboard, Andrew Barrie on drums and Keith Dickson on second accordion for their second spot. Drummer Andrew Gibb and second box player David Kennedy had been forced to drop out at the last minute so Adam thanked their stand-ins. It’s always good to have a local band and they gave an excellent account of themselves. One particular highlight was a spectacular Continental number by the name of Brise Napolotaine. Good to know that the younger players are still introducing something from another musical genre into their programmes.

Little did we think as we said our goodbyes after Biggar Accordion & Fiddle Club’s March 2020 meeting that it would be 20 months before we would meet again. It wasn’t exactly business as usual since we had a temporary change of venue to Coulter Hall, to allow us more space, and the usual superb catering arrangement had to be watered down a bit. That said, we were delighted to welcome all the old faces as well as some new ones, audience wise, and we weren’t short of local talent on stage.

We had decided on a cautious start to the season with a ‘Club Afternoon’ and no guest artiste but with the wealth of local talent on offer that wasn’t a problem. MC and Club Chairman Alan Gardiner opened the afternoon by thanking Keith Dickson for his superb efforts with an on-line ‘Virtual Accordion & Fiddle Club’ all the way through our missing 2020 season which kept everyone together and entertained. It had entailed a great deal of time and effort and Keith and all the participants were to be congratulated.
​
On accordions we had several proud dads with the next generation namely Stuart and Alistair Adamson from Forth, Alan and Calum Gardiner from Elsrickle and Jim and Emily Gold from Carnwath as well as Fin Hope from Broughton (this time with grandad Tom on drums), Davy Millar, Marshall Harkness, Neil MacMillan from Rowardennan, Ronnie Easton from Lauder and Charlie Todd. On fiddle were Emma Gardiner, June Meikle, Tom Gold and Gilbert Logan. On keyboard Jim Gold, Alan Gardiner and Neil MacMillan and on drums Tom and Fin Hope and Charlie Todd.

​Next month sees local lad Adam Gibb from Toftcombs entertaining us with his band on Sunday 12th December at 2pm, again in Coulter Hall - we hope to see you there.