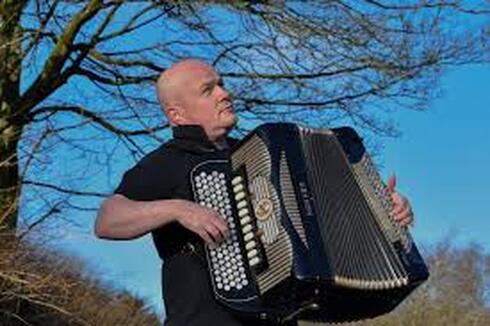 Biggar rounded off the season on Sunday, 14th April at Biggar Bowling Club with the unique 5-piece sound of the Gordon Shand Scottish Dance Band. But first it was the local players who entertained us, namely accordionists Newby Park, Reg White, Fin Hope, Charlie Todd, Molly Tolson, Fiona Paul, Jamie Webster, Jake Johnstone and members of the Edinburgh based Scots Music Group accordion class (Sheena Dickson, Pat Drewitt, Liz Hall, Catriona Maplesden and Elspeth Porter).
On fiddle we had Tom Gold, Emma Gardiner, Margaret Robertson and Finlay Close. Keyboard players were Fiona Paul, Alan Gardiner, Margaret Robertson, Jenna Johnstone and Keith Dickson and drummers Andrew Barrie, Tom Hope and Charlie Todd. Willie Little played the tin whistle. Thanks to them all.
Gordon Shand, from Dunfermline, playing a 5-row Continental Hohner Gola accordion was accompanied on stage by Alison Smith (fiddle), Jim Lindsay (second accordion), Graham Berry (keyboard) and Gordon Smith (drums). Noted for their interesting arrangements, the band worked its way through a first-class repertoire, which kept a full-house well entertained. Gordon’s composing talents were well represented as he performed several tunes from his new tune book Bridge the Gap including Cameron’s Rugby Tackle, James & Emma’s 18th and Kickin’ Country. His three children Clelland, Blythe and Inver joined the local players to demonstrate their individual talents, backed by dad, Gordon Smith and their teacher, Keith Dickson on keyboard. All three show a maturity far beyond their years.
MC Alan Gardiner rounded off the season by thanking Biggar Bowling Club for hosting us, Alec and Nettie Maxwell for manning the bar all season and the ladies for providing and serving the excellent half-time buffet. That’s it now till Sunday, 10th November when our guests will be the 60s Bairns. We look forward to seeing you then. 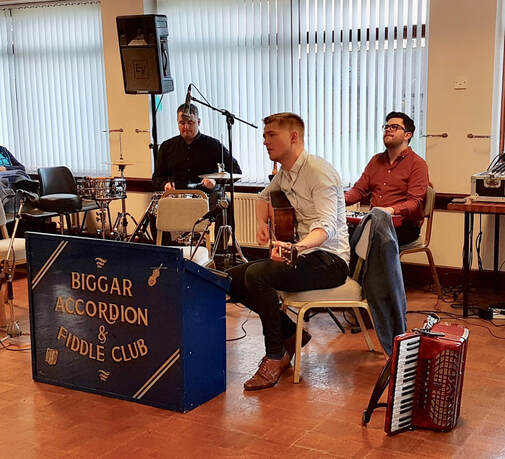 
​Sunday, 10th March, and almost the first heavy snow of the   winter made us uneasy but it proved to be intermittent so we decided to go ahead with our regular meeting in the company of guests artistes Robert Robertson (accordion), Ross Wilson (keyboard) and Fraser McInnes (drums). Numbers attending were down due to the weather conditions but locals who braved the cold were accordionists Fin Hope, Davy Millar, Alan Gardiner, Fiona Paul, Molly Tolson, Joseph Finkelstein, Emily Gold, Jake Johnstone, Sheena Dickson, Charlie Todd and Jim Gold. On fiddle were Emma Gardiner, Tom Gold and Gilbert Logan and on keyboard Fiona Paul, Alan Gardiner, Keith Dickson and Jim Gold. Drummers were Andrew Barrie and Tom Hope.
11 year old bandleader Fin Hope was congratulated by MC, Alan Gardiner, on his band success at last week’s NAAFC Championships in Grangemouth Town Hall in the new ‘Club Representative Open’ Section which he won leading a band of Biggar Club musicians. Youngsters Emily Gold (6) and Jake Johnstone did us proud with their selections.
Our guests are well known West Coast musicians, now resident in Glasgow. Robert and Ross are members of ‘Tidelines’ and as well as being an excellent accordionist Robert gave us three songs, demonstrating not only a first class voice and ability on the guitar, but his native Gaelic also. Ross, on keyboard, provided a sympathetic and skillful accompaniment of both selections and songs and Fraser demonstrated why he is in such demand as a drummer. The strong West Coast influence was amply demonstrated by plenty on 2/4 marches played just the way we like them.
Our thanks to the boys for making their way to Biggar on such a cold and miserable day and also to Biggar Bowling club for hosting us and KODA mums for the half-time buffet.
​ 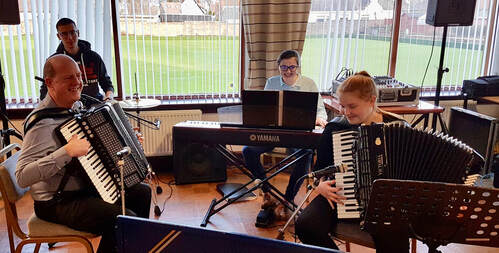 Sunday 10th February saw a full house at Biggar Bowling Club to hear India Smith in her debut guest artiste spot. But first we were treated to a wealth of local talent including two of Keith Dickson’s accordion groups polishing up their pieces for the Northern Ireland Open Accordion Championships held in Carrickfergus in a couple of weeks time.
On accordion we had Emma Dickson, Sheena Dickson, Alan Gardiner, Jim Gold, Fraser Hewitt, Anna Scott, Brian Smith and Charlie Todd. On fiddle Finlay Close, Emma Gardiner, and Gilbert Logan. Backing on piano was provided by Keith Dickson, Alan Gardiner and Jim Gold and for the first time Keith’s son, James Dickson. Drumming was handled by Tom Hope and in his more usual role the aforementioned James Dickson. Willie Little played us some tunes on tin whistle.
Keith’s accordion groups are based at Wallace Hall Primary School and Academy in Thornhill and the Junior Group consisted of accordionists Kirsten Fergusson, Harry Menzies, Áine O’Hara, Lily Simpson and Euan Wilson who performed a piece called Weekend. The Senior Group featured Kyle Anderson, Daisy Arnold, Ellie Arnold and Darroch Wood who played the slow-air Tonder - The Eternal Friendship and two lively reels. Well done to both groups and good luck in Ireland.
Each year we offer a guest spot to a young up-and-coming musician and this year we were delighted to welcome India Smith from Penicuik. Backed by Emma, James and Keith (the Dickson family are a ready-made backing group) India gave us a wonderful selection of mainly Continental numbers, including a couple of wonderful tangos. Well done India in this debut performance. We understand that she recently travelled to Canada to compete in the Accordion World Championships in Victoria, BC - so maybe Biggar wasn’t such a trial after all!
Thanks once again to Biggar Bowling Club for their hospitality and to the ladies for preparing and serving the half-time buffet. 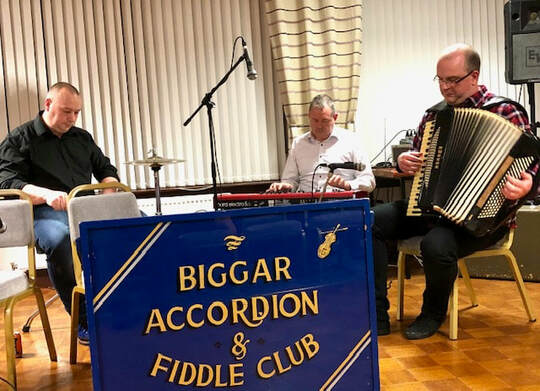 ​
​January, a new year dawns, and Sunday 13th saw our first meeting at the Biggar Bowling Club. Our guests were the Iain Anderson Trio from Langholm with Iain on lead accordion, Iain Cathcart on keyboard and Eric Goodfellow on drums. But first we were entertained by our local talent. On accordion we had Fin Hope, Charlie Todd, Jim Gold, Emily Gold (aged 6), Jamie Webster, Andrew Gibb, Brian Smith, India Smith, Fiona Paul and Davy Millar. On fiddle were Gilbert Logan, Tom Gold, Islay Cathcart and Finlay Close. Backing was provided on keyboard by Fiona Paul, Alan Gardiner, Jim Gold and Keith Dickson and drummers were Tom Hope, Charlie Todd, Ross Anderson and Andrew Gibb.  Thanks to them all.
Our guests, The Iain Anderson Trio, provided a grand selection of Scottish music, all without the aid of dot of music, which were thoroughly enjoyed by the listeners. Iain enjoys a laid back, relaxed style and yet there’s nothing in the Scottish repertoire that he can’t handle with consummate ease and Iain Cathcart and Eric backed him in the same effortless style.
Thanks again to the KODA mums and helpers who provided an excellent spread at half time and to the Biggar Bowling Club for the use of their facilities. 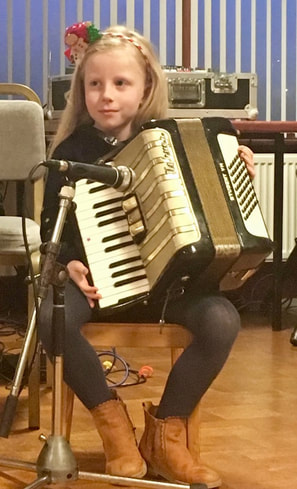 ​
​As usual our December meeting, held on Sunday 9th, took the form of a club afternoon and featured a  wealth of  local talent.
On accordion were Sheena Dickson, Alan Gardiner, Andrew Gibb, Jim Gold, Fin Hope, Jake Johnstone, Fiona Paul, Brian and India Smith, Charlie Todd and Molly Tolson.
On fiddle were Finlay Close, Emma Gardiner, Tom Gold and Gilbert Logan.
On piano were Keith Dickson, Jim Gold, Jenna Johnstone and Fiona Paul.
And drummers were Andrew Gibb, Tom Hope, Charlie Todd and Graham Wood.
In addition to the above we had two accordion groups from Thornhill in Dumfriesshire, all pupils of Keith Dickson. The first was a group of 13 - 17 year olds from Wallace Hall Academy consisting of accordionists Kyle Anderson, Ellie Arnold and Darroch Wood and keyboard player Declan McGarva. They played three excellent dance sets which they would be using later in the week at the school’s dances. Declan also played an expressive piano solo - Chopin’s Nocturne in C Sharp Minor. The second group consisted of five accordionists, Kirsten Fergusson, Harry Menzies, Aine O’Hara, Lily Simpson and Euan Wilson, from Wallace Hall Primary School. These young musicians (from P6 and P7) entertained the audience with two well-known Christmas songs - Frosty the Snowman and White Christmas.
But the star of the show must be 6-year-old Emily Gold from Carstairs, daughter of Jim and Hannah Gold, who performed a Gaelic Waltz Medley and Jingle Bells on her wee black Hohner accordion faultlessly. Well done Emily - Dad had better watch out!
Thanks to the ladies for the excellent half-time buffet and to Biggar Bowling Club again for their kind hospitality. The Club wish all their supporters a Merry Christmas and a Happy New Year. 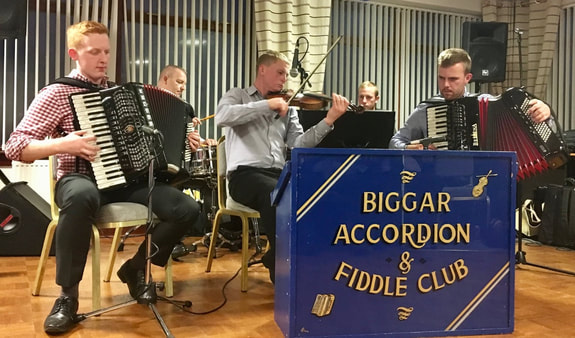 ​Sunday 11th November saw us head back to Biggar Bowling Club for our first   meeting of the 2018 - 2019 (our 45th) season. MC Jim Gold welcomed everyone and introduced the Andrew Gibb Band, our November guest artistes, who played a couple of sets to get the afternoon off to a swinging start. An attentive audience were then well entertained by a good turnout of supporting musicians. On accordion: Sheena Dickson, Emily Gold, Alec Graham, Jake Johnstone, David Kennedy, Davie Miller, Molly Tolson, John Weaks and Jamie Webster. On piano: Keith Dickson, Evie Glen, Alec Graham and Jenna Johnstone. On drums: Tom Hope and Graham Wood. On tin-whistle: Willie Little. It’s great to see and hear all ages performing at our club.
Our guest band required little introduction as it consisted of well-known local musicians Andrew and Adam Gibb on accordion from Biggar, Tom Gold from Douglas on fiddle, Jim Gold from Carstairs Junction on piano and Gordon Smith, the farthest travelled, from Gullane on drums. This five-piece band sounded fantastic - performing a variety of tunes including the lively jig Tom Hope of Nisbet and the lovely slow air Mark’s Legacy. As our meeting was held on Remembrance Sunday it felt most appropriate when our guests performed a Wartime Medley, featuring the World War 1 marching song Pack Up Your Troubles. The band’s music, which was interspersed by tune information and comical stories from Andrew, also included a popular Skipinnish song The Island (featuring Adam Gibb on vocals) which was well received by the club’s appreciative audience. A great start to the new season.
Thanks again to the Bowling Club for their kind hospitality and to the ladies for the excellent half-time buffet.