​The Club met on Sunday, 8th March, to be entertained by the Alan Crookston Trio but firstly we had the local players, namely accordionists Fin Hope, Fiona Paul, Newby Park, Charlie Todd, Alex Graham, Alan Gardiner, Jim and Emily Gold, John Weaks, Allan Smith, Sheena Dickson and Magnus Turpie who was accompanied on small pipes by his dad, Mike. On fiddle were Emma Gardiner and Katie Seivwright and backing was provided on keyboard by Fiona Paul, Alex Graham, Alan Gardiner, Keith Dickson and Jim Gold and on drums by Tom Hope, Fin Hope, Charlie Todd, Ian Graham and Andrew Barrie. We also had members of the Scots Music Group from Edinburgh, namely Linda Campbell, Sheena Dickson, Pat Drewitt, Rachael Frith, Liz Hall, Elspeth Porter and Andrew Rushworth, who are tutored by Keith Dickson who backed them on keyboard. Thanks to them for making the journey through and congratulations to young Fin Hope on leading the Biggar ’Club Representative’ band at Grangemouth on the 7th March and taking first place.


Our guests, the Alan Crookston Trio, namely Alan on lead accordion, Liam Stewart on keyboard and Alan Irvine on drums played an excellent and entertaining repertoire, as usual without a dot of music in front of them. The tempos were excellent for dance music with the brakes released a little on the jigs and reels. A highly enjoyable performance all round.


Our thanks to the Biggar Bowing Club for hosting us and to the helpers who provide the excellent half-time buffet. Our next meeting due on Sunday 12th April will unfortunately be cancelled with the ongoing Coronavirus situation. 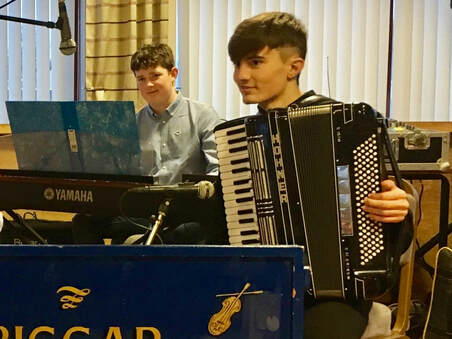 
Biggar Club’s February meeting on Sunday 9th went ahead in the teeth of Storm Ciara. After 18 hours of often torrential rain the Clyde was probably as high as we’ve ever seen it with several local roads closed. Undoubtedly the wind and rain affected numbers but we were delighted to welcome accordionists Davy Millar, Alan Gardiner, Andrew Gibb, Newby Park, Charlie Todd, Sheena Dickson and Jim Gold  as well as a young contingent, whom we are always delighted to welcome, namely Skye Ross, Luke Pendred, Emily Gold, Daisy Arnold, Fin Hope and Calum Gardiner.  On fiddle were Emma Gardiner and Tom Gold and on tin whistle Willie Little.  Backing was provided on keyboard by Jim Gold, Alan Gardiner and Keith Dickson and drums were in the hands of Tom and Fin Hope, Charlie Todd and Andrew Gibb.

Our guests for the afternoon were Darroch Wood and Friends. Darroch, a pupil of Keith Dickson, is from Keir Mill, near Penpont in Dumfriesshire and he was accompanied by Keith on keyboard and Andrew Gibb on drums. They played a wide variety of material occasionally venturing away from the Scottish to play pieces such as Frosini’s Bel Viso and Sous Le Ciel De Paris. Keith handed over the keyboard role on a couple of occasions to another of his pupils, Fergus Bainbridge from Thornhill who backed Darroch in the Queen number We Are the Champions (a first at Biggar) and Sharon Shannon’s Blackbird played by Darroch on a suitably tuned accordion. Well done to this debut band.

Thanks must go once again to our hosts, the Biggar Bowling Club, and to the ladies who provide the excellent half time buffet.
Next month sees the Alan Crookston SDB entertaining us on Sunday 8th March at 2pm - we hope to see you there. 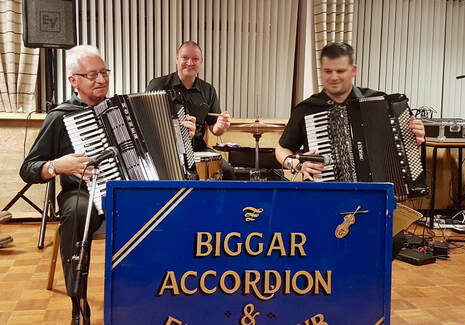 Our guest Trio consisted of local lads Richard Smith on lead accordion, Ian Graham from Carluke on second accordion and Iain Buchanan from Airdrie on drums. They provided us with a variety of Scottish music together with Frosini’s ‘Hot Points’ and Charles Camilleri’s Continental waltz Corrine, all played with considerable punch and enthusiasm, which were well received by the sizeable audience. Thanks are due in particular to a number of new audience members and players from the North of England.
Half time refreshments and home baking was once again provided by our willing band of helpers and thanks to Biggar Bowling Club the use of their facilities, in this our tenth season with them.
​


Sunday, December 8th and despite heavy rain it was almost a full house at the Biggar Bowling Club to hear local artistes The Jim Gold Trio and singer Shelley Clark. For the second year the entire Committee got into the swing of things with an array of Christmas jumpers. Local artistes turned out in abundance, with accordionists Janet Graham, Alan Gardiner, Fiona Paul, Charlie Todd, Andrew Gibb, Davy Millar, Alec Graham, Newby Park, Allan Smith, Kenny Johnstone and David Kennedy. But it was the youngsters who stole the show, namely Emily Gold, Calum Gardiner, Jake and Jenna Johnstone, Molly Tolson and Jamie Webster. On fiddle were Emma Gardiner and young Finlay Close from Pettinain and on keyboard Fiona Paul, Alan Gardiner, Alec Graham, Stevie Todd and Keith Dickson. Drummer were Tom Hope, Charlie Todd, Andrew Barrie and Andrew Gibb. Willie Little, from Dumfries, played the tin whistle. Thanks to them all.

Our guests were the ever popular Jim Gold Trio, with Jim on lead, brother Tom on fiddle and Ross Anderson on drums and Peruvian ‘cajon’. They were joined in each half by Shelley Clark from Sanquhar for a few songs. Shelley is an excellent singer and adds that extra dimension to the band with songs ranging from a Burns classic to recent film scores. Jim and the boys worked their way through a thoroughly entertaining programme including some new selections recently added to their repertoire. Thanks to them all and to the KODA Mums for the excellent half time home baking and to the BBC for hosting us.

Oh, and it was mentioned by our Chairman/MC in the vote of thanks that a little bird had told him that Tom and Shelley had recently become engaged – after an eleven year courtship. (Are they exchanging rings or long service medals?)
​ 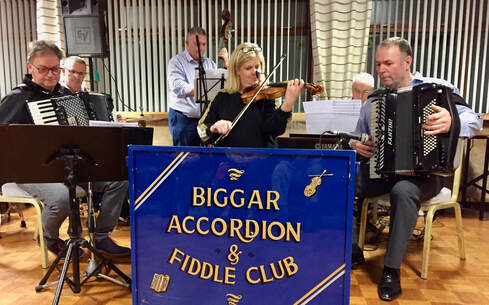 Biggar’s season opened on Sunday 10th November 2019 in the very capable hands of “60s Bairns”. But before they took to the stage we were entertained by a wealth of local talent with accordionists John Weaks, Fiona Paul, Janet Graham, Alec Graham, Robin Waite, Allan Smith, David Kennedy, Charlie Todd, Davy Millar and Jim Gold but it was the ‘next generation’ in the form of youngsters Fin Hope, Calum Gardiner and Emily Gold who stole the show, particularly our Chairman’s son Calum making his debut appearance with aunt Jane Baird on fiddle. His smile, and the audience ovation at the end, said it all.

On fiddle were Emma Gardiner, Jane Baird, Iona Cruickshank, Finlay Retson and Tom Gold. On keyboard we had Fiona Paul, Alec Graham, Keith Dickson, Jim Gold and Stevie Todd and on drums Tom Hope, Charlie Todd, James Dickson and Andrew Gibb. Thanks to them all.

Our guests, 60s Bairns, consisted of the regular line-up with Marie Fielding on fiddle, Duncan Black on lead accordion, Ian Muir on second accordion, Dennis Morrison on keyboard, Brian Cruickshank on string bass and Gordon Smith on drums. In a sense this is a ‘tribute band’, which entirely suited the audience, featuring many recognised selections from the greats, particularly Jim Johnstone, Ian Powrie and odd one from John Ellis as well as some of their own sets. A particular highlight for many was an accordion duet ‘Toytown Trumpeters’ not heard for many years since Max Houliston and Ian Holmes recorded it for the ‘Accordions Unlimited’ album. The playing throughout was enthusiastic and inspiring and was thoroughly enjoyed by all.

Brian Cruickshank also took the opportunity to present Fin Hope with the trophy he won at the Grangemouth Competition in March of this year.

Thanks to the Biggar Bowling Club for hosting us and to the KODA mums for the half-time buffet. 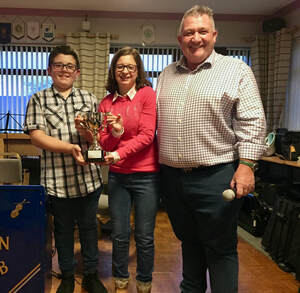