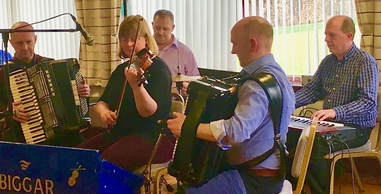 
Biggar brought the season to a close on Sunday 8th April at Biggar Bowling Club with an old favourite as our guest artist, none other than our own Chairman, Alan Gardiner, and his Scottish Dance Band. Being in the middle of the school Easter break, young local players were scarcer than usual but we were entertained by accordionists Fin Hope, Janet Graham, Ann Wall, India Smith, Jim Gold, Fiona Paul, Jake Johnstone, Jamie Webster, Sheena Dickson, Charlie Todd and Allan Smith with a special mention to six-year-old Emily Gold who made her first appearance on the box. On fiddle was Tom Gold and on tin whistle and recorder Willie Little. Accompaniment was in the hands of keyboard players Fiona Paul, Jim Gold, Jenna Johnstone and Keith Dickson and drummers Tom Hope, Fin Hope and Charlie Todd.
Periodically the Committee manage to talk the reluctant Alan Gardiner into taking on the guest role for us and we were well rewarded with the band’s usual immaculate performance. Alan had wife Emma on fiddle, nephew Kevin Gardiner on second box, and long-term band members Gordon Smith from Gullane on drums and our very own Keith Dickson on keyboard. Listeners had turned out in force, a full house in fact, many of whom have supported Alan over the last 30 years and who were taking this rare opportunity to hear the full band again. They were treated to the usual swingy playing and arrangements plus the usual lighthearted banter. A thoroughly enjoyable afternoon.
Presentations were made to Alex and Nettie of the Bowling Club for all their help over the season and thanks are extended once again to the ladies for providing the half-time buffet.
That’s it all over again until Sunday 11th November when we resume in the Biggar Bowling Club at 2pm in the company of the Andrew Gibb SDB.  See you all there. 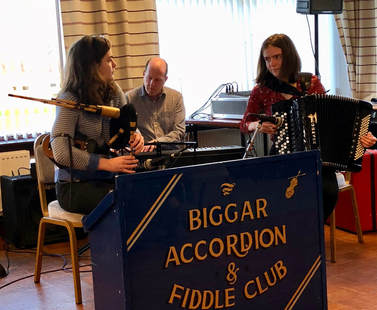 Ciorstaidh and Brighde Chaimbeul
March 2018
​
Biggar Club met on Sunday, 11th March, Mothering Sunday, to be entertained by two talented sisters from Kyle of Lochalsh – Ciorstaidh and Brighde Chaimbeul.
Ciorstaidh, who currently studies at St Mary’s Music School in Edinburgh, alternated between piano-key and 5-row button-key accordions during the performance and displayed a thorough command of both instruments. She was joined in a few selections by her sister Brighde, an extremely talented player of the smallpipes, whom Alan Gardiner, in his introduction, informed us was the winner of the 2016 BBC Radio 2 Young Folk Award - a UK wide competition. Suitable accompaniment was provided on piano by Ciorstaidh’s teacher Keith Dickson. Thanks to the trio and to the girls' parents Angus Peter and Liondsaidh, for making the 6 hour journey down from Kyle of Lochalsh.
Local support was provided by accordionists Fin Hope, Davie Millar, India Smith, Robin and Deryn Waitt, Charlie Todd, Ann Wall, Emma Dickson, Jim Gold, Fiona Paul and Sheena Dickson. On fiddle were Gilbert Logan, Finlay Close and Tom Gold. Backing was provided on keyboard by Fiona Paul, Alan Gardiner, Jim Gold, Keith Dickson and Emma Dickson and drumming was in the hands of Tom Hope, James Dickson and Charlie Todd. Willie Little played the tin whistle and Sheila McLean from Edinburgh sang us The Isle of Tiree. Sheila had brought along the former First Lady of Edinburgh Scottish Country Dancing, Dorothy Leurs, now in her 90th year, and it was a delight to meet her. We also had the Piano Accordion class from the Edinburgh based Scots Music Group in attendance, (with class tutor Keith Dickson) namely accordionists Sheena Dickson, Pat Drewitt, Rachel Frith, Liz Hall, Alistair MacIntosh, Elspeth Porter, Ian Ramsay and Bill Wallace who played as a group.
As ever, thanks to Biggar Bowling Club for hosting us, the ladies for the half-time buffet and Alan and Joan for keeping the afternoon programme flowing.
Next month sees us back at the BBC for our last meeting of the season on Sunday 8th April at 2pm with our Chairman, Alan Gardiner, and his Scottish Dance Band providing the music. We look forward to seeing you there. 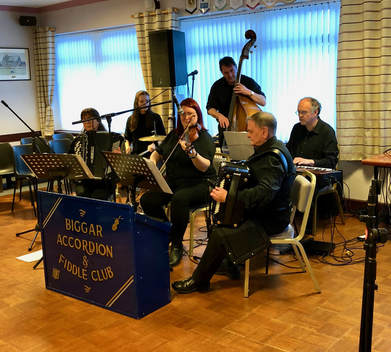 
February’s guest artiste revived many memories of ‘the old days’ for Club members as Jack Delaney had played in Alex MacArthur’s Band in the 1980s but he was here with his own six-piece this time. With Jack on lead accordion, Jackie Raeburn on second box, Fiona Cook on fiddle, Melanie Dutton on drums, John Delaney on bass and Alastair McGirr on piano the band entertained the audience to two excellent spots of fine, old style, Scottish dance music with some nice arrangements. As Jack introduced his selections he was able to relate to the composers, most of whom had been personal friends in his earlier days, particularly Menstrie’s Andrew Rankine, the first broadcasting band he played in.
With our meeting clashing with the school mid-term holidays we were slightly down in numbers but were ably entertained by accordionists Janet Graham, Davy Millar, India Smith, Andrew Gibb, Ann Wall, Fiona Paul, Jim Gold and Charlie Todd. On fiddle were Gilbert Logan, Finlay Close and Tom Gold and on keyboard Fiona Paul, Jim Gold, Keith Dickson and Ian Wilson. Drummers for the afternoon were Tom Hope and Charlie Todd. Shelley Clark from Sanquhar was persuaded to give us a couple of songs and our youngest performer, Emily Gold, daughter of Jim and Hannah, recited a poem for us.
Thanks to the Biggar Bowling Club, and to the ladies for providing and serving the half-time buffet. 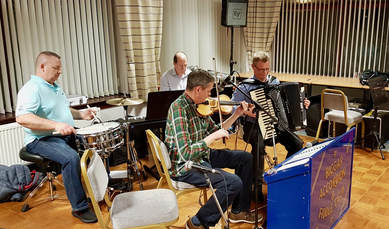 ​Biggar Club started the year with an old friends as guest artiste – The Gary Donaldson SDB – who were in cracking form. But first we had a wealth of local talent who had come along to entertain us. On accordions were Fin Hope, Molly Tolson, India Smith, Brian Smith, Fiona Paul, Fiona Sinclair, Jamie Webster, Davy Millar, Andrew Gibb, Ann Wall, Newby Park, Jim Gold and Charlie Todd. Our lone fiddler was Tom Gold and keyboard players were Alan Gardiner, Fiona Paul, Jim Gold and Shona Sinclair with Tom Hope, Andrew Barrie and Charlie Todd on drums. Thanks to them all for their splendid music.
Our guest artiste, Gary Donaldson, was accompanied by Russell Hunter on fiddle, Keith Dickson on keyboard and Gordon Smith on drums. As we all know Gary started young, as one half of The Donaldson Brothers, and the years have done nothing to detract from his dexterity on the accordion keyboard. Everything was played with precision and swing and particularly outstanding were the two Continental pieces. We usually see Russell in his periodic visits to Biggar on the keyboard but he demonstrated that he’s also a first class band fiddler. Well done to all the boys for a thoroughly entertaining and enjoyable afternoon.
Thanks, as always, to our hosts the Biggar Bowling Club and to the KODA mums (and others) for the excellent half-time buffet not forgetting our Chairman and MC Alan Gardiner and Joan Gold who keep the afternoon running smoothly. 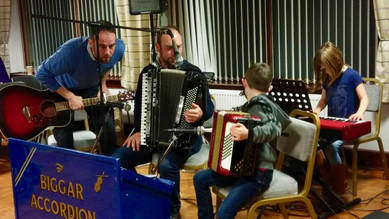 Biggar rounded off the year with a Club Afternoon at its meeting on Sunday, 10th December, and a very family friendly affair it turned out to be. On accordions were Joseph Finkelstein, Alan Gardiner, Charlie Todd, Fiona Sinclair, Fin Hope, Jamie Webster, Ann Wall, Ian Ramsay, Fiona Paul, Jim Gold, Andrew Gibb and David Kennedy, On fiddle were Emma Gardiner, Tom Gold and Finlay Close from Pettinain. Keyboard players were Shona Sinclair, Fiona Paul and Stevie Todd with Tom Hope, Andrew Gibb and Charlie Todd on drums and 6-year-old Calum Gardiner accompanying his mum and dad on African bongo. Brother and sister, Shane and Shelley Clark, from Sanquhar gave us a few very well received songs culminating in a Christmas theme.
The Johnstone family from Crawfordjohn also provided some excellent entertainment. On accordions were dad Kenny and young son Jake, while mum Lorna was the vocalist and daughter Jenna played the keyboard, as did uncle Stevie Johnstone. A very talented family.
Thanks to the ladies for providing the buffet and to the Biggar Bowling Club for hosting us as usual. Our thanks to everyone for making it an excellent afternoon. 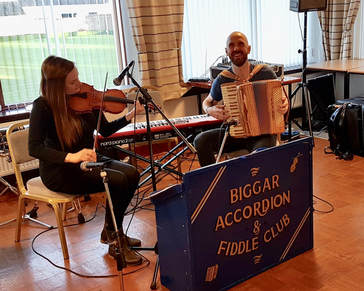 Our guest artists for the afternoon were Lauren MacColl from Carrbridge and Angus Lyon from Quothquan, both tremendous musicians in their own right and, as a duo, played a very varied programme of traditional and not so traditional music to keep our feet tapping. Both are members of Blazin’ Fiddles and their professionalism shone through in their performances. Thank you to both for providing a great afternoon’s entertainment.