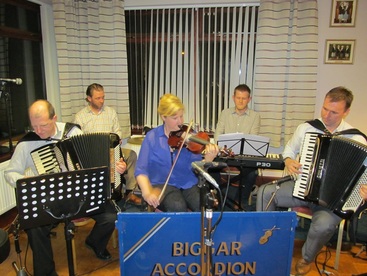 There was some tremendous playing from the various combinations of the above prior to the two spots from our guests The Black Rose Ceilidh Band. Alasdair MacCuish mentioned that it is now ten years since the band performed regularly and 12 since he made his last CD. Accompanied by Marie Fielding on fiddle, Tom Orr on keyboard and Iain ‘Stretch’ MacFadyen on drums and mandolin the band showed they had lost none of their magic with a captivating variety of selections all superbly played.

Chairman, Alan Gardiner, rounded of the evening (and season) by thanking the guests, Biggar Bowling Club, and in particular Alex and Nettie on the bar, Sheena Dickson and the KODA mums for the home baking we have enjoyed all season and everyone for attending and supporting us.

We look forward to resuming on Sunday 8th September. 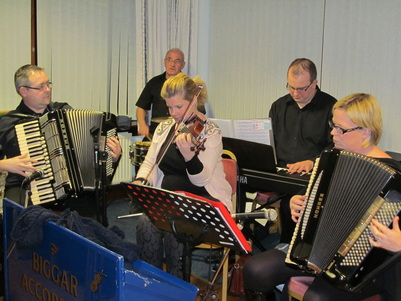 
Sunday, 10th March, saw a slight fall of snow just exactly when we didn’t need it. Thankfully many of our enthusiasts turned out to Biggar Bowing Club anyway and were treated to some fine playing from our local artistes and our guest for the evening the Shirley Cathcart SDB.

Local accordionists for the evening were Alan and Kyle Rowan, Brian and India Smith, Samantha and Andrew Erskine, Fraser Hewitt, Emma Dickson, Fiona Paul, Claire Black, Jim Gold, Andrew Gibb and Charlie Todd. Several of the youngsters performed some well executed Continental pieces, Bourrasque and Dantesque amongst them, which were thoroughly enjoyed.  On fiddle we had Tom Gold and Gilbert Logan, on concertina David Corner and on keyboard Keith Dickson, Fiona Paul and Fiona Shearer. Drums were in the hands of James Dickson, Tom Hope and Charlie Todd.

The guest bandleader for the evening was Shirley Cathcart from Law Village, who led on accordion, with husband Iain on second accordion, Marie Fielding on fiddle, Ian Anderson (Gartocharn) on keyboard and Gus Millar on drums. With an experienced line up like this the music was swinging from the start and Shirley led us through a variety of tempos in an entertaining and enjoyable programme which included a fiddle solo from Marie. 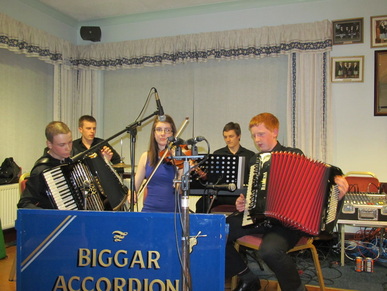 Biggar Club met on Sunday, 10th February with a welcome turnout of both players and listeners. We were delighted to welcome as our guests The Adam Gibb SDB led by local lad Adam from Toftcombs Farm making his debut as a guest artiste. Adam led on accordion (although he also plays the fiddle equally well) with older brother Andrew on drums, Adin Graham (Windygates) on second accordion, Hannah Dickson (Dolphinton) on fiddle and Stevie Todd (Dalkeith) on keyboard. As Club Chairman and MC, Alan Gardiner, said at the end of the band’s performance, 15 year old Adam plays with a “maturity beyond his years.” The band gave us two excellent and entertaining spots with music in a variety of tempos. Without doubt a name to watch for the future.

Thanks to the BBC (Biggar Bowling Club) for the use of their premises and the KODA mums for the tea and eats at half time. 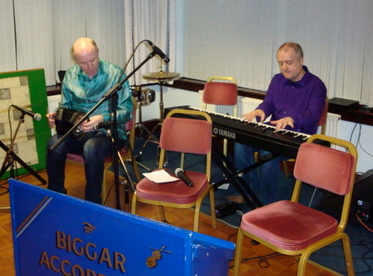 
Our meeting date, Sunday January 13th, unfortunately saw a reasonably heavy snowfall which deterred a great many of our regular audience. However those who did brave the elements were treated to a virtuoso display of traditional and contemporary Scottish music by our guests Simon Thoumire (concertina) and Dave Milligan (piano) - but more on that later.

Firstly we enjoyed a wealth of local talent with a group of adult learners from the Scots Music Group project in Edinburgh under the direction of Keith Dickson first to take the stage. They were Susan Aitcheson, Angus Creech, Liz Hall, Alistair McIntosh, Elspeth Porter, Gordon Stewart, Bill Wallace and Keith himself on accordions backed by Emma Dickson on piano. Very well done to all of them and thanks for making the journey.

Our guests performance was worthy of ‘Celtic Connections’ never mind the BBC (Biggar Bowling Club). With a departure from our usual dance music style our guests Simon and Dave quickly captured the attention of the small audience with their unique approach to Scottish music. Thoumire’s superb concertina technique and expressive melodic playing was supported by Milligan’s creative piano accompaniment styles and innovative arrangements with both instruments blending together to provide an attractive overall sound. Their highly entertaining programme, which was performed completely from memory, varied from lively reels and jigs to slower strathspeys and airs, including a few of Simon’s own compositions. Generally the concertina would take the lead with the piano supporting and providing interesting links between tunes, however occasionally the duo would launch into fluent unison melodic passages, which were delivered with an impressive rhythmic accuracy and drive. Simon’s slightly improvised and rubato approach in the strathspeys and airs added a charm and extra dimension to the performance with the lead part using suitable ornamentation and vibrato to great effect. Both musicians appeared to be thoroughly enjoying and appreciating the support from each other throughout the performance, completing their set with “The Tipsy Sailor” which received an extremely appreciative response from the club’s audience.

Thanks to our Club Chairman and MC Alan Gardiner for once again doing the honours and to the KODA mums for the lovely buffet at half time. The only sad note Alan had to report was the sad demise of wife Emma’s fiddle, which he had managed to reverse over recently in the wee sma’ ‘oors after returning from a gig in Mull. ‘Gone but not forgotten’ as they say – especially by Emma! 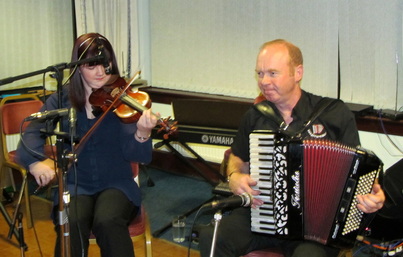 The Club held their last meeting of 2012 in the Biggar Bowling Club on Sunday 9th December. Guest artistes for the evening were the immensely talented Gordon Pattullo and Gemma Donald.

Gordon and Gemma gave us a highly entertaining programme of well executed selections with a slant towards North American tunes, traditional and contemporary. Both are masters of their instruments and it’s a joy to watch and listen to their effortless execution of some very tricky numbers interspersed with some lovely waltzes and airs.

Thanks to Sheena Dickson and the KODA mums for providing the Christmas Fare at the tea-break. May we wish everyone a very Merry Christmas and a Happy New Year. 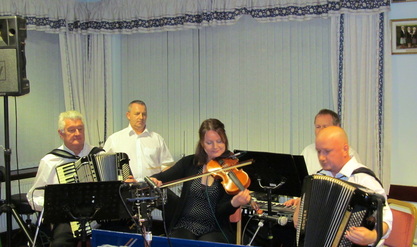 We were fortunate to have a capacity crowd for our November meeting with fantastic guests in the form of Gordon Shand and his Scottish Dance Band, a 5 piece band consisting of Gordon (lead accordion), Alison Smith (fiddle), Jim Lindsay (2nd accordion), Graham Berry (piano) and Gordon Smith (drums). The band treated us to a great variety of traditional music including a number of Gordon’s own compositions, all played with real enthusiasm and energy. A great band indeed. 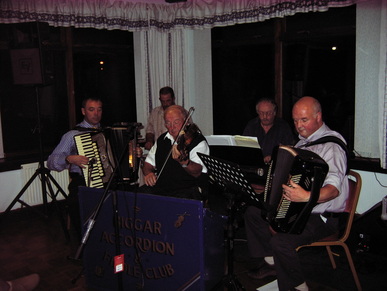